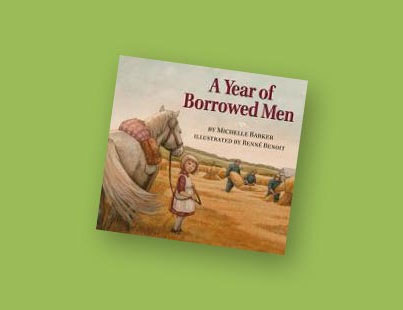 When World War II “borrows” the men in seven-year-old Gerda’s family, the German government sends them three new men in return: Gabriel, Fermaine, and Albert, French prisoners of war who must sleep in an outbuilding and work the farm until the war is over. Gerda knows they are supposed to treat the men as enemies, but it doesn’t seem fair. Can’t they invite them into the warm house for one meal? What harm could it do to be friendly?

Writing from her mother’s childhood memories of Germany during World War II,  Michelle Barker shares the story of one family’s daring kindness in a time of widespread anger and suspicion. Renne Benoit’s illustrations bring warmth to the era, showing the small ways in which a forbidden friendship bloomed: good food, a much-loved doll, a secret Christmas tree. Family photographs and an Author’s Note give further insight into the life of Gerda, the little girl who proved that it isn’t so far from Feinde (enemies) to Freunde (friends).

Reviews:
“Benoit’s watercolor and colored-pencil illustrations…combine precise details…with a softness and warmth that convey the tenderness of memory. She strikes a tone of gentle sweetness…that, like the text, is never sappy. Children will find many things to notice, and the book raises some interesting questions, such as the complicated idea of who is an “enemy.” —The Horn Book Magazine

“Based on a true story, this precious gem evokes compassion in a way that is sure to resonate with young audiences… Photos preceding and following the text document what Gerda, her family, and the farm looked like. Illustrations done in watercolor and colored pencil, with a touch of pastel, create a beautiful backdrop that darkens and lightens with the tone of the narrative. VERDICT Purchase where nuanced portrayals of family during World War II are needed. Keep the tissues close by!”—School Library Journal


“A Year of Borrowed Men” contributes positively and significantly to our understanding of the compassion of some of the German populace who placed themselves in an almost untenable psychological situation.”—Resource Links

“A tender memoir of human decency during wartime… The addition of old family photos from that time is poignant. This heartfelt picture book helps readers appreciate wartime’s toll.”—Kirkus Reviews

“The story, it turns out, is not about prisoners or the ravages of war so much as it is about kindness and humanity—a powerful message equally relevant today…[A]t its heart, this family tale is a tender evocation of empathy, bravery, and friendship.”—Quill & Quire

“Benoit’s realistic watercolour, coloured pencil, and pastel illustrations employ an earthy palette that brings this heartfelt story to life… [T]he overarching theme of kindness in a time of mistrust and suspicion gives the story a universal appeal that will likely spur many thoughtful discussions. Highly Recommended.”—CM Magazine

“Based on her mother’s childhood memories of Germany during World War II, Michelle Barker’s book is a poignant account of one family’s brave acts of kindness in an atmosphere thick with fear and distrust…Renné Benoit’s watercolour, coloured pencil and pastel illustrations convey a pastoral environment imbued with the bleakness of war.”—Canadian Children’s BookNews

“A fine story of ‘borrowed men’ and their effects evolves in a story seldom told for this age range.”—Midwest Book Review

“This story reminds us that friendship has no borders. Beautiful watercolour drawings and original photographs make this a great book youngsters.”—Calgary Herald

“If you like books that inspire lots of questions from your kids, this is a good one.”—Victoria Times Colonist

“This story shares that no matter the situation, kindness and friendship can be shown to those around you…Recommended.”—School Library Connection

“A simple story which can teach young children to see the humanity of people at war.”—Youth Services Book Reviews

“A beautiful, poignant story that subtly introduces humanity during times of war.”—Books for the Curious Child

“The text is clear and accessible to young readers. The narrative is interesting for reading aloud….I have no hesitation in recommending this book for families, meetings, and schools….This book reminds me that…friendship is a precious fruit of peace that requires eternal vigilance and attention to the little things.”—Friends Journal

“Read this brave, kindhearted story with children ages 4 and up. Warm, homey illustrations strike a gentle tone throughout. An Author’s Note tells more about the harrowing war experiences of the author’s mother.”—Orange Marmalade Books

“This story of kindness, friendship, and a loving family is illustrated realistically with watercolor, colored pencils, and pastel to evoke the warmth of the situation at a time when there was little hope for many. The addition of family photos and an author’s note add clarity. This is a story to be shared…at a Remembrance Day Service…or at Christmas, a time of giving and for being kind and thankful.”—Sal’s Fiction Addiction

“Although the story covers the year the POWs were at the Schlottke’s farm, because of the number of pages devoted to Christmas, it makes a nice holiday story, as well. There may not have been Peace of Earth at that time, but at least on one farm there was Goodwill towards men.”—The Children’s War

“[T]his book is a very human look at hard times in European history. Full of tender and sweet moments and the harsh realities of suspicion sand cruelties of war.”—There’s a Book For That

Learn more about the background for A Year of Borrowed Men here.