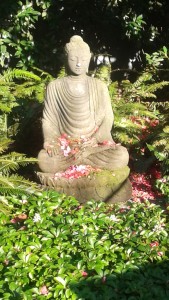 I don’t know a whole lot about Zen, but there is one part of the tradition that rather appeals to me. Apparently when you’re meditating in the Zendo, there’s a monk called a Jikijitsu who walks around with a long stick, called a Kyosaku. He’s sort of like the Focus Police. If he senses your mind wandering (how does he sense this? I don’t know. They know things, these Jikijitsu), he whacks you on the shoulder with his stick for a little wake-up call. It’s not meant as a punishment; it’s actually known as a blow of compassion.

I could use a Jikijitsu standing behind me when I write. Actually he wouldn’t have to hit me. All he’d have to do is unplug the internet connection and I’d wake up. (On the other hand, he would not be allowed to touch my Nutella toast, or he might get a blow of compassion right back).

Writing is all about focus. I didn’t fully realize this until I returned to playing the piano and learned very quickly about what happens when your mind wanders: bad, bad music. Many wrong notes. Tenants in neighbouring apartments complaining.

I discovered that my mind wanders pathologically when I play piano. The worst is when I start to think, Wow, I’ve nearly made it through the whole piece without making a mistake. Which, of course, causes a mistake, because my mind isn’t where it needs to be: on the notes.

Writing is the same, only it’s a lot less noticeable. If you’re fully immersed in a scene, everything around you disappears. You’re there. You can smell it, taste it, you know what your character is going to do next because you are your character. You don’t have her flipping on a light switch in your medieval fantasy. You don’t forget that there are three other people in the room with her. How could you? You are present in every sense of the word.

When you’re not present, however, the writing becomes mechanical. It loses that spark, that bit of life that makes it real. You’re thinking about what to make for dinner, or wondering if anyone e-mailed you – and then, well, why not check your e-mail? So you take yourself totally away from the document, thus requiring you to re-focus when you return. If you can.

The worst thing about this is, I often don’t even know I’m not present when I’m writing. I’ve only become more attuned to it because of the piano and the stunning realization that I am regularly not where I think I am. This is where a Jikijitsu could have a full and rewarding job standing behind me. I’d get blows of compassion about every five minutes.

Check it for yourself. How often, while reading, do you realize you have no idea what the previous paragraph was about? While your eyes were seeing the words, your brain was figuring out how to get from one kid’s soccer practice to another’s hockey game. We think we’re good at multi-tasking, but maybe we’re not. Walking and chewing gum at the same time might well be my outer limit.

When you’re fully present in your work, you are not multi-tasking. Life around you shuts down. You forget to eat. You don’t hear traffic. You forget to turn the light on. Your coffee sits untouched (well, mine doesn’t, but whatever). By the time you look up, you are stunned to realize three hours have passed while you were immersed, absolutely part of the world you were creating. Some people might call that inspiration, but I don’t think that’s what it is. I think it’s presence. It can happen every day, every time you sit down to write – if you’re focussed.

Turn off the internet. Set your phone on silent. Take a few deep breaths. I bet it will make a difference.