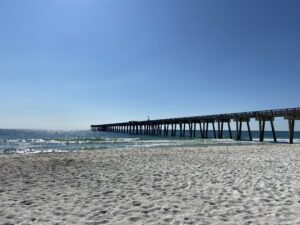 We did it! This was Ironman #2 for me and my daughter, though we both thought this one felt harder—but that’s likely because we forgot (or blocked out) the pain of Whistler.

The race in Florida involves an ocean swim, so we spent all week eyeing that ocean and wondering what it would give us. For most of the week it was as calm as glass. But on Friday, the day before the race, the wind picked up and the water was wild.

The swells would have been perfect for bodysurfing, but they were not so good for a four-kilometer swim. We went for a practice swim in it and prepared ourselves mentally for what we feared we’d face on Saturday morning.

Sure enough, when Saturday arrived, the conditions hadn’t changed. 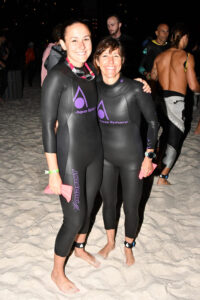 I’ve never dreaded a swim more in my life. Pushing through the surf that crashed onto the shore was the first challenge. Sighting the buoys was the second. Most of the time when I picked up my head to sight, either I was in a trough or the buoys were.

People were pretty bunched up, so there was a lot of kicking and smacks to the head. We had to fight for our space in the water.

And then there were the jellyfish. A LOT of jellyfish. It was impossible to avoid them. At one point, I realized I’d been stung on the cheek. But there was nothing I could do about that, so I set it aside and kept swimming.

The hardest thing was getting out of the water after the first loop AND THEN GOING BACK IN TO DO IT AGAIN.

However, I was thankful for the swim training we’d done. We went to several VOWSA open water swims at Kits during the summer because we knew the conditions were usually rough and everyone started together—meaning, we got used to choppy, crowded swimming. And we did several long lake swims and swam with Masters, so we felt strong.

All of that is to say, I didn’t panic. I knew I could do it. I just didn’t enjoy it. 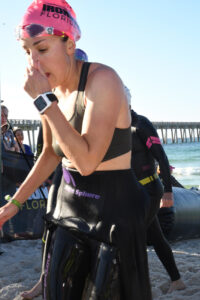 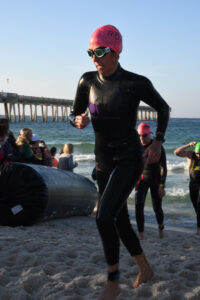 The transitions were long in this course—much longer than Whistler—and involved a lot of time simply running to collect our stuff and get to the change tents.

The first hour or so on the bike was a bit of a mental challenge, but I expected that. You look at your watch or computer and start calculating how many hours you still have to go. That is not a helpful way to get through a long ride. But then I remembered it always takes me about forty-five minutes to settle in, and eventually I did. 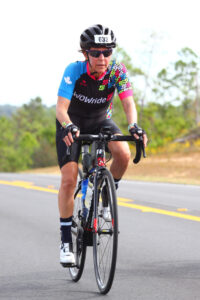 The ride was the best part of the race for me. We trained for the conditions we knew we were going to face—a lot of flat windy roads. Plus, I had no mechanical issues, so that was lucky. But it was hot. At a certain point I felt myself overheating, so at the next few aid stations I asked one of the volunteers to douse me with cold water. It helped. I also made a point of drinking a lot. Heat stroke is 100% preventable, and I was determined it wouldn’t happen to me.

What was great on the bike: the Coke in my special needs bag and a few extra-strength Tylenols. It’s the magic combination.

What was disgusting: the orange Gatorade they handed out at aid stations. Yuk. It reminded me of the stuff they make you drink when you’re pregnant and testing for diabetes. Eventually I had no choice but to drink it, but I mixed it with water to make it a little less disgusting.

I was very pleased that I still had so much life left in my legs by the end of the ride. We had done three 160km training rides in the space of four weeks, and I think that made a big difference.

But then came the marathon. 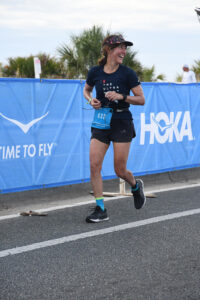 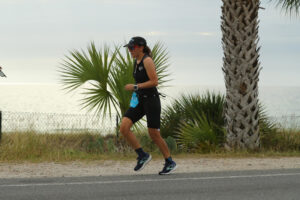 I was not trained for this run. I’d had a major foot issue for several months thanks to a broken toe that threw a bone out of place, so I couldn’t put in the time I needed to make this leg of the race tolerable. I knew it would be a dumpster fire, and it was. You can’t cheat a marathon. Well, you can’t cheat any part of this race. If you’re not trained, it’s going to suck, and you might not make it to the end.

The marathon was—in a word—horrible. I managed to walk-run for the first 25km, which was longer than I’d expected to do it. I purposely kept it slow in order to stretch it out as long as possible. I knew that even at that slow pace I would still be faster than walking.

I wore my Asics because they’re comfortable over long distances, but by 25km my feet were aching. I had put band aids in my special needs bag and considered stopping to bandage my feet but decided not to bother. That turned out to be a good decision. My feet had started swelling up on the bike, for reasons I still can’t figure out, though I suspect it might have been from jellyfish stings. By 25km, they were so covered in blisters that if I had taken off my socks and shoes, I might not have put them back on again. I saw one guy walking the marathon barefoot, shoes in hand. I was thankful that wasn’t me.

After that point, I walked for a while and then started playing games to get me through. One minute on, one minute off. Walk to this pylon, run to the next one. The run course was two loops of a flat out and back, which might sound easy, but in fact it was soul-deadening. The only thing that kept me going was the wonderful spectators playing music, making jokes, and cheering us on.

By the time I neared the finish line, I found myself feeling incredibly emotional. This race had been a battle. It was a long, hard day. But as my friend put it, it didn’t beat us. We beat it. And that felt good.

I held it together as I ran down the finish chute, but when I saw my daughter waiting for me at the end, I broke down and cried. 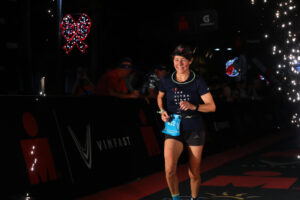 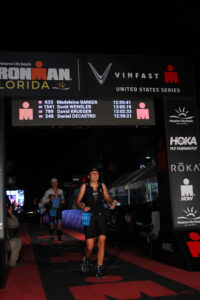 What did I learn from this race?

Well, I would never travel home the day after. Never, never, never again. It was a nightmare. The day after the race you feel like trash. You’re hungry, but then not. Exhausted, but can’t sleep. My legs were so sore I didn’t dare bend down or I wouldn’t get up again. My feet were so blistered I could only wear sandals.

I will do whatever it takes to train properly for the run next time. I know I have a good marathon in me. I just have to make it through training without getting injured.

Foundational strength training is something that will be getting a lot more attention next time around.

Also, let me say this for the record: there is nothing in the world that a person will want to eat by the time they get to the 25km mark of the marathon. Anything you put in your special needs bag for the run is bound to end up in the garbage. This is not true of the bike special needs. That’s key. Choose your treats carefully. They will see you through to the end. But by the time you’re over halfway into the marathon, all you’ll want is what they’re already offering at the aid stations: chips, Coke, and chicken broth. Maybe an orange slice. So, don’t waste your time. Carry Tylenol and band aids with you and don’t bother with special needs on the run.

Why did I not put spray sunscreen into my transition bags? I don’t know.

But there are some things we did right. Our pre-race-day meal was one of them: white rice, chicken breast, steamed vegetables, eaten at around 2PM, with only a small dinner later. We also slept a lot the week before the race because we knew we wouldn’t sleep the night before.

Training for the conditions we knew (or feared) we would be racing in was incredibly helpful. And, using TriBike Transport to send over our bikes and gear alleviated a lot of stress for us.

It’ll be a while before I can face another peanut butter and jam sandwich, and I won’t be lacing up my runners anytime soon. But we’re already planning the next one: Chattanooga 2024, we’re coming for you!