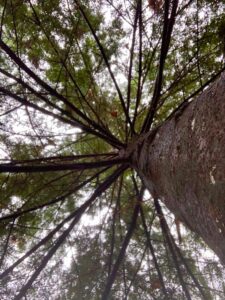 Every writer has their own process for how they start a novel—everything from how long they let an idea percolate, to what they do with it when they decide to sit down and get to work turning it into a book. Even the particular seed they start with—a character, a scene, an idea, an image—varies from one writer to the next.

I keep an idea folder on my laptop and add to it whenever something new and weird pops into my head. Ideas and notes tend to sit there for a few years before I decide it’s time to pull one out and test it, see if there’s really something there. And equally important, see if it’s something I might be willing to devote one to two years of my life working on. Writing a novel is an all-encompassing task. You’d better love what you’ve chosen to write about, otherwise you’ll either spend a lot of time being miserable or you’ll give up on it.

Last week I was perusing my idea folder and came upon some notes for a novel I’d been wanting to write for many years. I had written and published several short stories that included the same few characters. At the time, I’d thought they would grow into a collection of connected stories, but they never did. The stories sat there waiting for me. For whatever reason—I don’t pretend to understand how this process works—suddenly, last week, it was the right time to work on this.

That’s the way it goes for me. I get the idea, I make notes about it, I put it away, and I wait. I go back and look at it and think, yes, it’s a good idea, but it’s not the right time to pursue it. Why? The stars aren’t aligned, Mercury’s in retrograde, I woke up on the wrong side of the bed—who knows? A few months later, I look again. Still a good idea; still not the right time. Months go by, years even, and then—boom, it’s time.

But an idea is not a novel. Not even close. It’s only the seed of what will hopefully mature into a many-branched tree. I’m the type of writer who needs to know what type of tree it’s going to be before I get started. I’ve done it the other way—throwing seeds into the wind—and I know where that leads. All sorts of things grow until you find yourself in a tangle and realize you have to dig it all up and start over. No thanks. It might work for other writers; it doesn’t work for me.

That said, I’m not the type who writes out every scene on index cards either. I’ve tried that, too, and it nearly drove me crazy. Instead, I write a synopsis of about a thousand words where I tell myself the story. I do that a few times, allowing the synopsis to get longer and more detailed. Then I pull out my trusted list of structural elements that are critical to a strong story foundation—things like the inciting incident, the point of no return, the midpoint reversal, the climax—and I make sure they all appear where they need to.

That is maybe the most important part of the process. You might think, Oh, let’s not worry about the midpoint or climax right now. Let’s not talk about character goals. We’ll tackle those things when we get there. No. Worry about them now. Believe me when I tell you, you’ll save yourself a lot of time and heartache. It’s a lot easier to rethink a synopsis than to start a whole novel over again.

Stay tuned, and I’ll talk about where the synopsis goes from there.