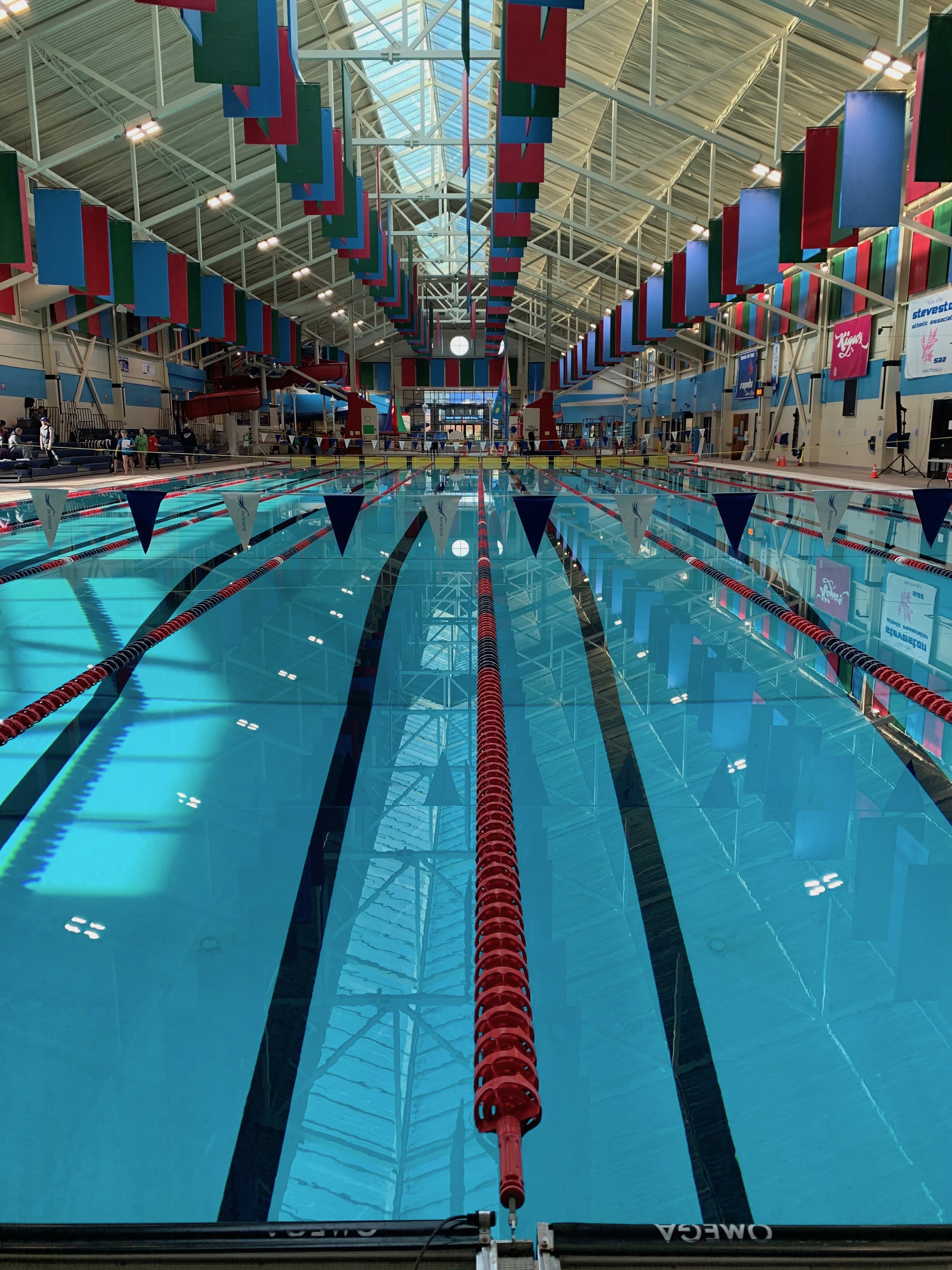 Several years ago, one of my kids swam competitively for one season, and I discovered the world of swim meets: psych sheets and heat sheets, forearms covered in numbers (distance, race number, heat number, and lane number). As seems to happen often, when I am sitting on the sidelines, I get ideas. That was how I ended up playing hockey for a few years (badly, it’s true, but oh it was fun). And it’s partly how I ended up swimming at a master’s swim meet yesterday.

I say partly, because my swim coach had to nag me for months to join the team. I loved the idea of competing, but it also made me a bit nervous. I’d have to dive off the blocks—and what if I came in last?

Then, about a month ago, I had the privilege of listening to pro-triathlete Rachel McBride speak at a friend’s home. She had a lot of good advice, including this: don’t wait to do the races you want to do. You don’t know how long you’ll be able to race in your life. Things change. Shit happens. It made an impact on me, and it got me thinking about what I still wanted to do sports-wise that I hadn’t yet done. And I thought about the swim team.

My coach reassured me that the team was all about having fun. No one cared if I messed up my dives or came in last—so I signed up.

A week before the meet, I went to the dive tank at VAC and practiced diving with my goggles on—something that had never worked for me before. They’d always flown off my head.

“Tuck your chin in,” my coach said. “Don’t try anything fancy. Just look down and go.”

Mostly that worked, which made me feel a tiny bit better. But I was diving off the side, not off the blocks—which is quite a different thing. You don’t realize how big those blocks are until you’re standing on one and looking down, knowing there are about a hundred different ways to screw this up.

Luckily I wasn’t the only one feeling nervous about this, and swimmers were able to practice off the blocks about a half hour before the races began.

Of course I’m writing about the meet because it was amazing. There was every shape and size of swimmer imaginable. Some were beginners; some set meet records. One man, age seventy-nine, swam a 200m fly. If you want to fully appreciate what that means, go find a pool and try 50m of it—if you can. When he was done, the entire place gave him a standing ovation.

Some of my races went far better than I ever would have expected; some were dismal. Ditto my dives. A few went off perfectly. You do feel like a boss, head down, poised to launch yourself into the pool—until you do something stupid and your goggles fill with water, and guess what? You have to swim like that for the entire race. Yeah, that happened. It was terrible. I could barely see where I was going and only knew where the end of the pool was when I touched it.

But I loved it—watching teammates surpass their expectations, cheering them on, going out for a well-earned dinner afterwards. I’m grateful I was able to do something I’d wanted to do for years—and I can’t wait to do it again.