It was the perfect storm, literally.

One of us hadn’t brought enough food.

One of us hadn’t brought enough clothes.

And one of us thought it would be fine to ride the mountains even though they were shrouded in clouds.

We’re hoping to do the triple crown in a few weeks, so we’ve been climbing as often as we can, usually doubling up on the mountains so we can experience their full nastiness.

For anyone who doesn’t know, the triple crown is a traditional Vancouver ride that involves climbing Seymour, Grouse, and Cypress—usually in that order. All told, with getting there and getting home, it works out to about 130km and 2600m in elevation.

In order for it to be a true triple crown, you have to start at the bottom of each mountain. Skipping those climbs—particularly the one to Cypress—is considered cheating.

I did the ride for the first time last year. It was gruelling but immensely satisfying. Now I’m hooked.

But when it comes to training for it, there are a few necessities:

But back to this weekend’s disastrous ride…

Our ascent up Grouse was chilly but fine. We were even fine at the first lookout at Cypress. There was blue sky; it was all good. 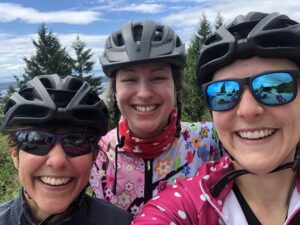 By the time we reached the top of Cypress, it was getting colder. Two hikers passed us saying, “Feels like winter.” Yeah. In our bike shorts it certainly did.

We bundled up as best we could and began the descent. 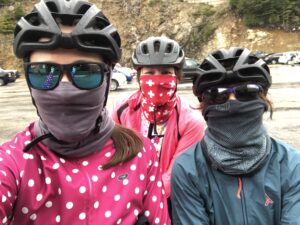 Then it started raining.

Then it started pouring.

Then it started pouring so hard we could barely see.

The ride down was slow and scary, and by the time we reached the bottom we were shivering and unable to continue. 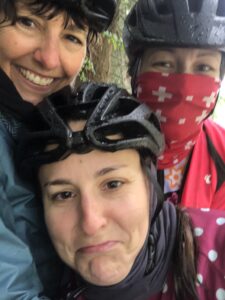 Thank God for generous Uber drivers with Escalades. We fit all three bikes into the back and, despite our being soaked and disgusting, the driver didn’t mind having us in his car. 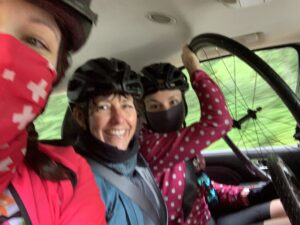 It’s a funny story in retrospect, but we learned some hard lessons for the big ride ahead—which naturally has been rechristened the Triple Clown.